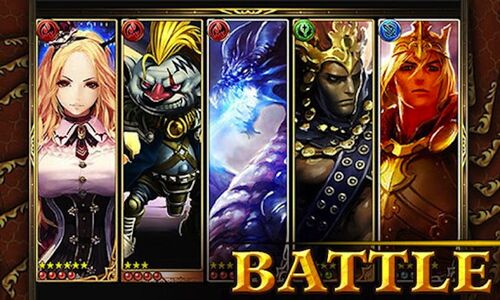 You have been given the option to challenge other players to battle. This will allow you to seize more Rupies and also steal ​Treasure from your opponent when your attack has been succesfull.

But other players may also take this opportunity to wage war against you! Allowing them to take what is rightfully yours! But have no fear, you can trap them by placing a Magic Circle on the Treasure you definetly do not want to lose. But if your opponent outsmarts you and chooses your other treasure, be sure to have your Defense Deck at the ready. If you have not made a Defense deck an chose to go with the recommended deck, you can see which cards will be used by looking at your "History" option in the menu section. So you won't wonder why you always lose when the game thinks its funny to have a single Elf Child defend your precious Treasure.

You are entitled to challenge the same player a maximum of 3 times a day.

Before choosing your oppenent, you can choose an option which will determine what kind of players there will be to choose from. From top to bottem on your screen these are:

"Choose by Treasure Possessed" will allow you to choose a treasure you would like to target. The game will then give you all the players that have that Treasure available for you to steal.

"Choose from similar LVL" option will give random players that will most likely not trigger Divine Judgement.

"Choose from High Rankers" was added after the Battle Ranking was introduced, giving you the option to battle players that have received a high ranking.

After having selected a Player to attack you will be transferd to the battle page. There is a lot of info to be found on this page. From top to bottem these are:

Info about the ATK PWR that you have versus what you will have after the attack.

An estemate of the obtainable honor points that you will most likely get, this will come in a MIN to MAX comparison.

An option to edit your deck before you start the battle and an option to change the selected deck if you have more then one pre-made deck.

The ATK PWR cost of the currently selected deck along with the combined ATK that the deck has.

A preview of the alignment of the cards in your current deck, there are speculations that the position of a card has influence on how big of a chance it has that its skill will be activated.

The rank that the oppenent has, along with a title (if the player has one) and his or her in-game name.

The DEF PWR of the selected oppenent.

And after that come the options to Start the Battle or to Battle Someone Else.

Having Started a Battle[] 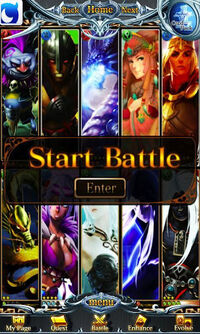 When you have chosen to attack a player you will see the cards that belong to you fall from the top of the screen, followed by the cards from your opponent coming from the bottem of the screen. Then you have the option to innitiate battle (even though it looks like it, if you have come this far in a battle, there is no turning back. The battle will be finished).

There will be a followup of a few happenings, in order:

First, you will get a boost you obtain from being in an order that has built one of its buildings for the 5% boost to an alignment

Second, you will get an alignment boost, this will increase the stats of your cards that have the same alignment as you.

After that there may be a morale boost if you have battled a player within 10 min of your current battle. This may differ from 10% for having defeated one previous player, 21% for have slain two previous players, and so on...

Then will come the skills from the cards that are used in battle.

The Battle is Over[] 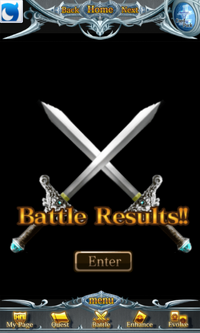 After all the preparations are made, the battle will comence. This will be no fancy action filled scene, but just simply 2 swords striking eachother whereafter you will have to tap the screen to continue to the results page.