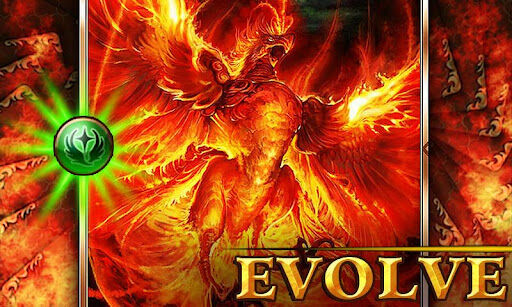 Evolving is one of the most important features in this game, that is why good preparation is important for good game-play. That is what this page is all about, giving you an idea of how evolving works.

Evolving a card will change its shape, and ATK and DEF will increase. This increase will depend on the ATK and DEF of the two evolver cards used.

When evolving a card, it is wise to take note of the following things:

A card can generally evolve four times, with some exceptions. A cards name and picture can give you information of which form it currently is. 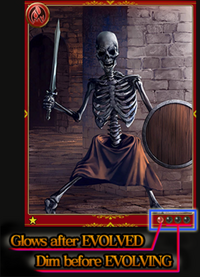 On the lower right part of the card (and with higher rank cards it will be the lower middle part) will be a set of "orbs". These orbs will indicate how many more times the current card can evolve. More orbs will glow after each evolving state.

So how about a card that has already been evolved? How can those be recognized. Well the solution is all in reading the cards. For example:

This card seems to have four illuminated orbs. This means that this card cannot evolve any further. Another warning will be given when attempting to evolve again in the evolving screen.

There seem to be no orbs at all present on this card. This is usually the case with cards obtained from completing a Treasure set and are not able to evolve.

It is even possible that a card can be evolved across more than four forms. If there are still un-illuminated orbs present, it means that the card can still be evolved even further!

When you evolve cards like this you can get a higher attack and defense on the fourth form card than if you simply evolved four first form cards in series. This is because you are able to boost the stats multiple times for each form. Your final form card will have much higher attack and defense stats if you fully mature each intermediary form card (i.e., enhance each card to its maximum level) before evolving to the next level.

Players commonly use one of five evolution styles: