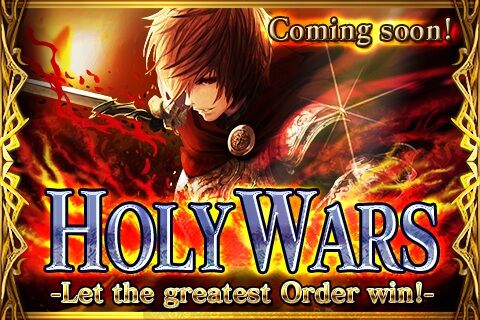 Note This is the general information for all Holy Wars

Holy Wars is a large scale Orders battle where within a one hour time frame, order members will engage in battle against each other.


Holy War will trigger when one order declares war, an oppositing order will be choosen randomly and battle notification will be sent to all members in the order.

Orders are to appoint out the following positions.

Walls are build by the Order Leader.
When battling against walls, your attack will be sharply reduced unless you have cards like Master Gunner, Ares or Mythril Golem which increase your damage against walls.

At the end of every Holy War, every participating player will receive a silver coin which they can use to exchange for cards of High Normal and above.
The top 3 players who earn the most holy war points will receive more coins.

Also every player will have "supportable Silver Coins" which they can send to order members.
Each player can only send to an order member once per day. When sending coins if you send a support message at the same time you will be able to earn 2 coins instead.
Thus for every coin you send, you and the target receipent will both receive 2 coins.